This particular post will be related from early 2001 in which I was still a 3  years old girl, but I remembered that my friend was a huge fan of F4, and I could remembered in the house we also watch the series although its not a routine TV time 🙂 Meteor Garden itself is an adaptation from a Japanese Manga called Hanayori Dango or Boys Over Flowers. Japan got their own series based on the same name and South Korea also get their version with Boys Before Flowers which I can say the starting of Hallyu wave. 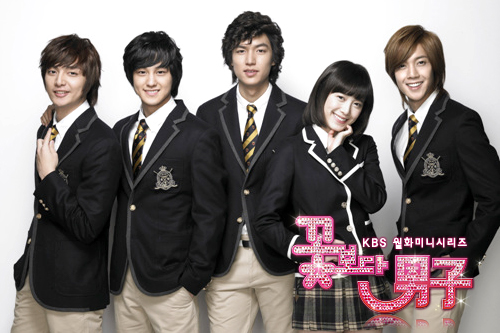 What I found it funny is that back in 2/3 years ago I have this Chinese competition at school, and my classmates wanted to sing one of the soundtrack 🙂 The song was Harlem Yu’s 情非得已” (Qíng Fēi Dé Yǐ) just to let everyone know we sang it so embarrassing-ly in a funny way, because no one actually remembered the lyrics 🙂

FYI this is Harlem Yu

They have 3 series Meteor Rise, and Meteor Garden II one of their songs for Meteor Garden II is “絕不能失去你” (Can’t Lose You), in fact its one of my favourite 🙂 from their third series. For me personally its easier to learn a language from a song or a movie because its more relatable and more fun, also because they use the language that we use for our everyday’s life too.

FYI F4 or JVKV is a Taiwanese boy band. The group composed of

They were widely popular in Asia regions :), the hallyu wave denote that F4 is related to the most handsome boys, and they have 4 members so they called in F4.. (I don’t know what the F stands for)

Going back to this series making me realised how time flies and how old I am now :), now I’m in my 20 🙂 I hope I’ll be able to explore my interests while I’m still young, and not afraid to fall, and if I fall I’ll take the fall. Despite all of that I look how the style changes a lot through the decades.

I can see how we evolve from this harajukish style to kpopish style, but honestly speaking K-Pop (the new generations) actually for me is a infused of J-Pop, Harajuku, and Western culture 🙂 for example like BIGBANG but they build a strong relationship with other Japanese artists too 🙂 that’s how amazing music is. Problem is some of the fans are way to childish to understand sometimes 🙂

actually the narrations of the trailer is in Tagalog 🙂 but anyways just pay attentions to the video :). I definitely love the song by Harlem Yu it brought up my memories together along the past years, my childhood, my Chinese teacher, my high school friends, and more. I missed my high school life, I move to Melbourne back in year 11 and its my decision.

Moving to Melbourne was not a big deal for me at first but the second year was the hardest. I started to miss my family, my home and everything. Its not really a culture shock for me since I’m able to speak the language there are this Asia’s spirit that I really miss 🙂 that’s why I started to listen to Japanese, Korean, Chinese music all over to connect with my homesickness 🙂 ❤ love you guys